Avishai Cohen with the BBC Concert Orchestra mesmerise at Barbican

The evening starts with the restraint and decorum proper to a classical concert – the correct formalities of applause for the first violin and conductor (Bastien Still) are observed, the baton is tapped on the lectern, and the 57-strong orchestra launch into Cohen's compositions 'Noam' and 'Hayo Hayta'.

We're placed firmly in the sound world of 19th century romanticism, with a passing suggestion of Gershwin's 'Summertime' emerging briefly from the sweeping strings - the effect is soothing rather than sublime. Avishai Cohen strides on from the wings; pianist Omri Mor and percussionist Itamar Doari follow, black-clad like their leader. After a spoken tribute to his late friend, London promoter John Ellson, Cohen picks up the bass that lies centre-stage and the orchestra launch into a sombre waltz. As the trio starts to play, the sonic focus switches rather abruptly from the subtle acoustics of the orchestra to the band's amplified sound coming through the PA system; but after Cohen's long, virtuosic solo full of shifting Middle Eastern accents, the strings return briefly and the sound becomes more integrated. Next comes a traditional Ladino song passed down from three generations of Cohens; backed by strings and woodwind, Avishai sings very affectingly in a light but powerful alto, and there's another brief exploration from the trio. Then 'Two Roses' takes us into more familiar territory; a pulsating polyrhythmic groove against fleet, complex unison lines from piano and bass, the orchestral arrangement sitting closely with the trio and building up with a rush to a sweeping wordless vocal melody, with Doari kicking up a storm on a hybrid array of jazz, orchestral and eastern percussion instruments that draws the biggest applause of the night so far. 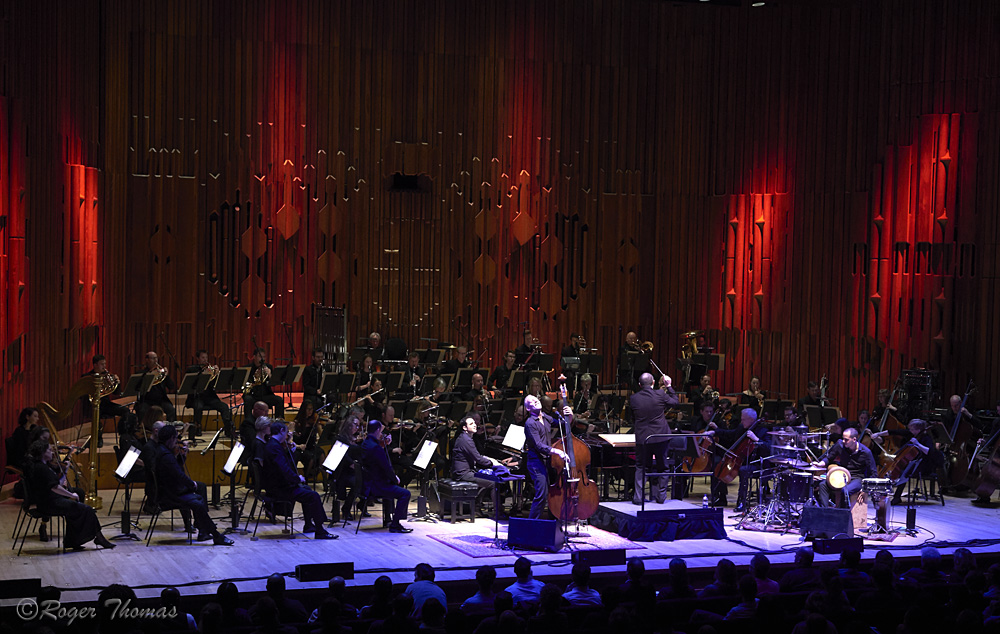 The journey through Cohen's musical multiverse continues with Hank Jones' 'A Child Is Born' – the ingenious rhythm arrangement and lush orchestral texture seems to call out for a vocal from Nat King Cole; it's bold, exciting and poised all at once. There are outstanding solos from Cohen and Mor – on the final beat Cohen hits a clear, powerful bass note and lets go of the bass so that it seems to stand for a second, balanced by it's own resonance. Cohen is a commanding, almost military presence, but the mood softens as he performs an Israeli pop song from his youth and sings straight from the heart; then there's a medley of material from Lebanese singer Samira. The band move effortlessly into the language of the Levant; the string section swoop and soar, the bowed bass echoes the grainy wail of the rabab fiddle, and Mor creates a spectacular solo by imitating the frenetic shimmer of the qanun or Arabic zither on his piano to roars of applause. "In music, everybody gets along – who says I can't play Arab songs?" comments Cohen wryly.

Things are really starting to hot up; 'Morenika' shows off Cohen's power, precision and flawless intonation and builds from compelling groove into a moving coda, with the orchestral writing powerfully integrated with the trio; then 'Alon Basela' explodes into an amazing dumbek solo from Doari before Cohen leaps aboard the stirring theme and rides his bass off into the sunset. The crowd are on their feet for an encore, and Cohen obliges with a bass solo on 'Seven Seas' that demonstrates how, in a world where many hip young musos are busy playing furious, offbeat ostinato grooves in impossible time signatures, Cohen is still the original and best. The crowd won't let him go, and he returns again and again and even offers to take requests. Playing solo, singing and accompanying himself by strumming, tapping and drumming on the bass, standing proudly centre stage, he seems to be channeling all the power of his diverse heritage. After a rather measured start, it's been a captivating journey through the unique world of this immensely talented multi-cultural maverick.