Port-au-Prince is one of the most intoxicating places I've ever been.

The Haitian capital is filthy and utterly dysfunctional – one vast, chaotic squatters camp/street market strewn across the hills that climb up towards Kenscoff and baked onto a coastal plane that drags itself into the Caribbean. It's the first city of the poorest country in the Western Hemisphere. A difficult, squalid place to live. But it's also colourful and captivating. It heightens your senses and works its way into your dreams, filling your head with images of lacy, "gingerbread" mansions and brightly painted "tap tap" minibuses, with the sound of carnival bands, birdsong and grinding gears, and the sweet smell of bougainvillea and gasoline.

I was taken aback by all the laughter. Haiti's backstory reads like an Argos catalogue of disasters. They've suffered colonial brutality and blackmail, political turmoil, ruthless dictatorship and sickening corporate exploitation, fires, hurricanes and epidemics. Not to mention the earthquake of 2010, one of the most catastrophic events of the modern era. Port-au-Prince has seen so much death, yet it feels full of life, sunnier and more optimistic than you'd think possible. It's truly inspiring.

As many expats will tell you (there are thousands of embassy staff and foreign NGO workers here), there's something magical about this city and some of that magic rubs off on the Festival International de Jazz de Port-au-Prince. The eight-day event, now in its 11th year, is co-run by Joël Widmaier, a musician and head of Haiti's Radio Metropole, and Milena Sandler, the daughter of celebrated Haitian actress and singer Toto Bissainthe. I was in town for the first half of the week. The programming was strong and the organisation, particularly the sound, was excellent. If you can run a jazz festival somewhere as logistically challenging as Port-au-Prince you really can run one anywhere. But it was the setting and the giddy, dreamlike atmosphere of the whole event that made it.

Take the opening night. Seeing Danilo Pérez (pictured top), Wayne Shorter's pianist of choice, is always special. Seeing Pérez play an intimate, after-hours set at the Quartier Latin, a bar in a converted mansion in the suburb of Pétion-Ville, while sipping Barbancourt rum and watching rain drip from the patio umbrellas and the leaves of the banana trees? That's an experience you don't forget. Particularly when it comes right off the back of a gala concert in the grounds of an old sugar plantation, patrolled by haughty peacocks and skittish guinea fowl, featuring Haitian-American vocalist Sarah Elizabeth Charles and trumpeter Christian Scott (below) on an open-air stage, playing their hearts out into the teeth of a tropical storm. 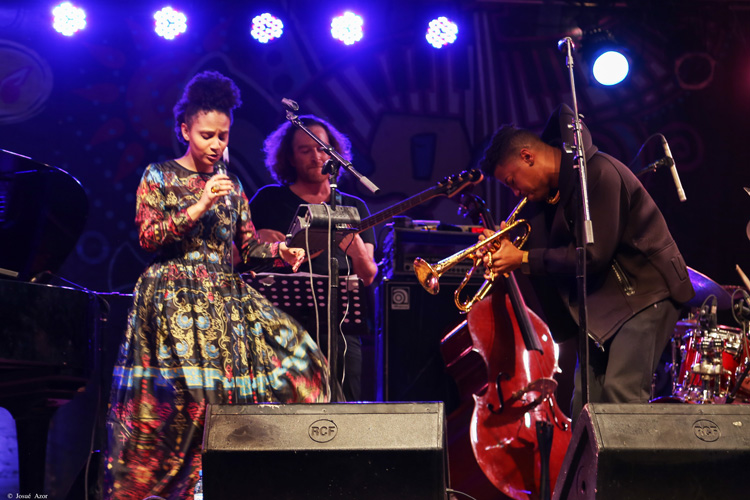 In the end, the elements proved too much and the set was cut short, though not before Scott had carved out a few lacerating, deeply soulful solos. Of Charles' originals, the best was 'Free of Form', the title track from her third album, due for release later this year. It began as a mellow, R&B groover, becoming grittier and rockier as it progressed, climaxing with blazing, electro-enhanced trumpet and vocals.

Pérez's set, though equally brief, was one of the highlights of the week. 'Elegant Dance', based on a refined Panamanian dance form called punto, and 'Suite For The Americas' brought quick-stepping rhythms on congas and drum kit interlaced with twisting horn lines and bold Wheeler-esque harmonies, played by fiery soprano player Carlos Agrazal and trumpeter Roberto Ruiz. Pérez was mesmerising throughout, needling the band (all tutors from his jazz foundation in Panama City) with keyboard thumps and broken chords and building the energy with scampering, asymmetric runs. 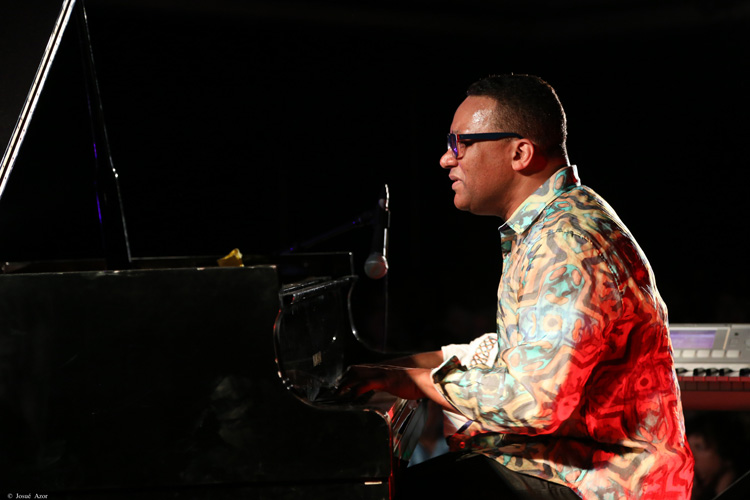 The next few days brought more magic and a little more characterful chaos. Most of the remaining performances took place on an open-air stage at Quisqueya University, which the tech team were still hastily building when we arrived on Monday night. A car had allegedly been parked in the allotted space and the driver hadn't come back, so a team of 10 burly Haitians had to pick it up and move it out of the way. There was an hour-long delay, but I passed the time watching tiny, iridescent hummingbirds flit between the magnolia trees, so no great hardship.

Those headline shows were followed by nightly after-hours sets at hotels and bars around the city. On Tuesday, impressive Belgian trumpeter Jean-Paul Estiévenart channeled Clifford Brown with half an hour of cutting hard bop at the Hôtel Montana, recently rebuilt following the quake. From the terrace you can see the whole of Port-au-Prince shimmering in the valley below. PapJazz has close ties with many of the embassies in Haiti, and both Europe and the Americas were well represented, with a small cast of careworn ambassadors taking turns to introduce their acts.

As you might expect, there was also a lot of latin jazz on the bill, and later in the week we saw an outstanding set from Cuban pianist Gonzalo Rubalcaba (above) and his Volcán Trio, of bassist Armando Gola and drummer Horacio 'el Negro' Hernandez. Rubalcaba has atrocious taste in synth sounds, but his piano-playing was sublime. Especially on 'El Cadete', a theatrical Danzon (one of Cuba's most elegant styles) written by his grandfather, a bandleader in the 1930s. Close your eyes and you were transported to a Havana ballroom, full of neatly turned-out Cuban gentlemen bowing to their dancing partners.

The remainder of the performance, which wound up with 'La Nueva Cubana', a Rubalcaba classic from the 1980s, brought bruising grooves and reams of rhythmic trickery. That's what makes top-flight Cuban bands such a joy to watch. Their rhythmic security is humbling. They have total freedom within the groove. They run rings around you and around each other, switching between meters so distantly related they wouldn't make it onto the same family tree. Watching 'El Negro' play steaming swing with one half of his body and fiendish, switchback clave patterns with the other, as Gola laid down a third bustling groove and Rubalcaba floated free of the time altogether, had me grinning from ear to ear.

The most unorthodox take on the latin jazz tradition came earlier that night, from German pianist Sebastian Schunke and his Berlin Quartet. Schunke has worked with Antonio Sánchez and Paquito d'Rivera. He named Rubalcaba as one of his heroes, but his approach is very much his own. It's like Latin jazz viewed through a kaleidoscope or glimpsed in a broken mirror. 'Move More' brought refracted montunos and splintered melodies and 'Misterioso' was dark and stormy, with a slug of romance and a dash of classical impressionism (Schunke was raised on Brahms and Debussy). Bassist Marcel Krömker was solid and there were muscular solos from Dan Freeman on saxes and Uruguayan drummer Diego Pinera, who whipped the band along with vicious snare-drum tattoos and a storm of percussion. 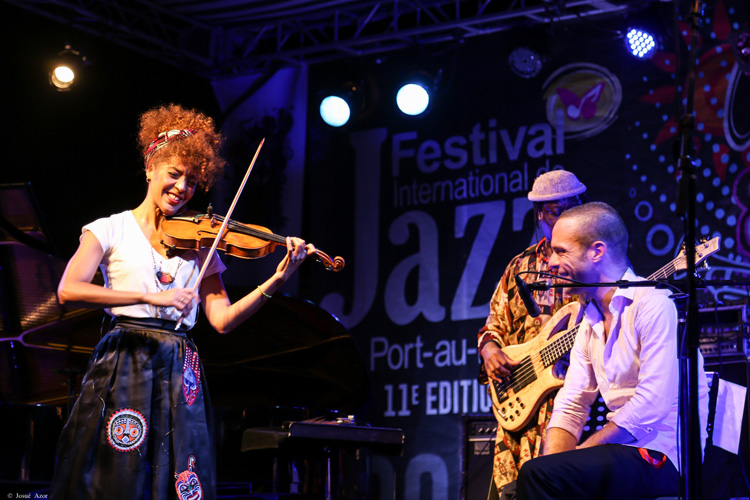 As this year's festival coincided with International Women's Day, there was also a focus on female artists, who made up over half the programme. Canadian vocalist/pianist Carol Welsman delivered a polished, gently-swinging set of standards, the perfect accompaniment to a balmy night on the rum punch. And Swiss-Cuban vocalist/violinist Yilian Cañizares (above) went down well with the studenty crowd at the university. A frenzied joint feature for Cañizares' violin and Richard Bona-like bassist Childo Tomas was a highlight.

With big international names on the bill, I worried that local bands might not get much of a look in, just as I worried after the gala concert at the sugar plantation and a lavish jazz brunch/art exhibition the next morning (attended by the same affluent, expat-heavy crowd) that the jazz festival might be aimed at a very limited section of Haitian society. Both concerns proved to be unfounded.

All of the university gigs were free and a big public event in Pétion-Ville's Boyer Square was planned for Friday, followed by a set from star Haitian DJ Gardy Girault. During my time there, young band SMS Kreyol blew the roof off Pétion-Ville bar Presse Café at one of the most enjoyable after-hours. Their music blends jazz, funk, soul and R&B with a ubiquitous Haitian style called compas (kompa, in Haitian Creole), that sounds a bit like laid-back reggaeton. There are myriad varieties, but at its core there's always a pulsing, easy-to-dance-to beat. SMS bassist/band-leader Steve Cineus and ultra-tight drummer Eder Junior Charles are excellent instrumentalists and there were guest appearances from young singer Alexa and James Germain, one of Haiti's best-known vocalists. Both have serious, soulful sets of lungs. 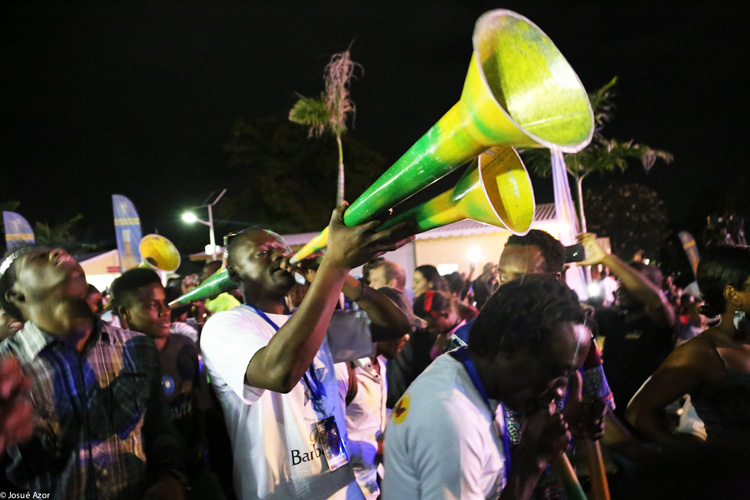 Festival co-founder Joël Widmaier and a virtuosic band featuring his father, Mushy, on keys, offered another take on Haitian jazz funk fusion, drawing on compas and creole pop, while at the jazz brunch, electric bassist Gerald Kebreau and his trio proved they had chops to burn. They even managed to make 'Cantaloupe Island' compelling.

And I have to mention Follow Jah (above), a rara band from Pétion-Ville. Rara is Haitian festival music, traditionally played during Easter processions. It's the Haitian equivalent of the Mardi Gras marching band tradition in New Orleans, a riot of drums, percussion and bouncy, blarty trumpets – rudimentary horns made from plastic or recycled tin. It's heaps of fun to dance to.

Follow Jah appeared at gigs throughout the week to entertain the crowds in the lull between sets and they were there on that opening night at the sugar plantation too, braving the elements, with a pair of dancers teetering atop stilts following along behind them.

To me, rara is the sound of Port-au-Prince: jubilant, raucous and chaotic. And it's just the beginning. Haiti's music scene is astonishingly rich, easily the equal of its neighbour, Cuba. It's just much, much less talked about. In part because no-one ever goes. The plane over was split fifty-fifty between Haitian expats returning home and Pennsylvania missionaries with evangelical smiles and carry-on bags full of can-do attitude. And if there's one thing Haiti doesn't need it's more religion.

What it needs is money and visitors. And it deserves them. Little by little Haitian tourism is bouncing back and PapJazz is part of that. If you want a festival experience that feels like an adventure, a trip, a step into the unknown, one that mixes star names with sounds you've never heard before, you should come. And if you do I expect you'll find it a hard place to forget.

On that first night at the Quartier Latin, I spoke to Monique, a French NGO worker in her forties who's been living in Port-au-Prince for the past 20 years. "You have to get away sometimes," she told me, "but Haiti always calls you back. It has this magnetic thing."

– All photos by Josué Azor