Hearing the work at its London album launch, in the beautiful setting of St John's Downshire Hill, from the opening 'Birdsong Chorale' to the climactic closing bars of 'Owl Song/Can y Gwdihw', the joyous, almost ecstatic quality of the music-making was even more pronounced than on the recording. The octet featured co-composers Kizzy Crawford (voice, guitar) and Gwilym Simcock (piano), plus a group of stellar musicians drawn from the Welsh chamber orchestra Sinfonia Cymru – violinists Simmy Singh and Lucy McKay, violist Fran Gilbert, cellist Abel Selaocoe, flautist Helen Wilson, plus horn player Carys Evans. At its heart, the work celebrates a unique rainforest in Powys, Carngafallt, using the seasons to describe the lives of its birds, trees and flowers through a yearly cycle. Central to its soundworld is the bilingual text setting, reflecting Crawford's deep love for, and intimate knowledge of, the Welsh language. 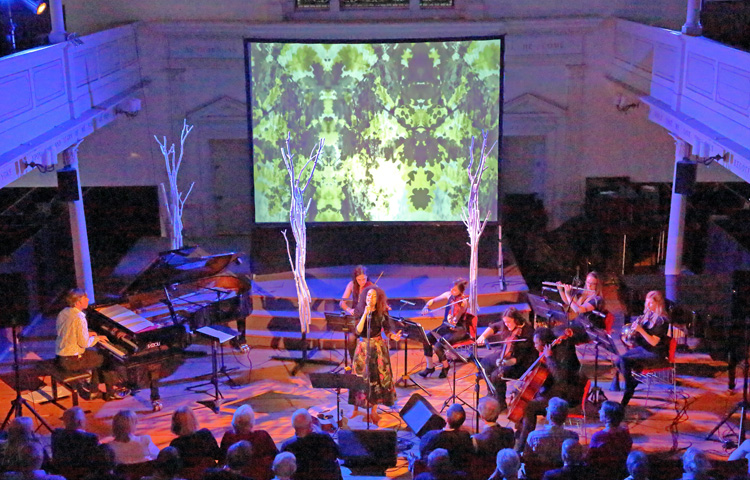 Both structurally and harmonically, the individual song structures were anything but typical, each one being packed with ear-catching detail. Highlights included Simcock interrupting his powerful vamp during 'Wildlife/Bywyd Gwyllt' to play the inside of his Fazioli grand piano like a bodhrán, the gorgeous harmonic shifts of 'Rhododendron', the almost Ravelian sensuousness of the opening passage of 'Angelic Soul/Enaid Angylaidd', the stacked up vocal harmonies in 'Back to the Trees/Nôl i'r Coed' and the breathtakingly blissful highpoints of 'Into The Dark Mystical Beauty/Mewn i'r Harddwch Tywyll Cyfriniol'. The performance also included a visual element, with the artist Ruby Fox creating a kaleidoscopic projected backdrop, an interpretation of what she herself saw and experienced when she visited Carngafallt. The pleasingly cyclical nature of the piece was expressed by the musicians processing on one by one at the beginning, improvising sounds from the rainforest, then similarly processing off at the end, returning to the same rainforest soundworld. It's a passionate and, at times, overwhelming work, a stunning achievement that is, without question, one of the albums of the year.