Whatever next? Just cornet, guitar and bass? Bare-bones, for sure, but on this evidence, something of a dream combination. American Knuffke, although a new name to me, has a substantial US discography plus more from these European excursions, all this including a meaty clutch of ‘name’ albums’. Given the usual relegation of cornet to the backwaters of early jazz, it’s no surprise that Knuffke proffers WC Handy’s ‘Beale Street Blues’ and ‘St Louis Blues’, but that’s a kind of tease since these reminders of the past are coupled with bright allusions to the present day.

What’s more, he vocalises in laid back fashion on ‘Beale Street’, with limpid guitar alongside, his cornet extrapolation mellow but pertinent, Rex Stewart-style half-valve chirrups leading to sudden, upward flourishes. His ‘Elizabeth Town’ is like a compendium of muffled effects, squeezed tones and spooky figures, bass walking evenly. Per’s ‘Same But Different’ has a rising shape and a pleasing guitar sequence before Knuffke’s entry suggests something of Ruby Braff’s clarity and boldness in attack. Duke’s ‘Just Squeeze Me’ works equally well, the cornet statement evocative and almost ethereal.

The title track swings as you might it expect it to do and I can even hear a distant reminder of our own Digby Fairweather’s clarion style. Knuffke has the necessary command and more to the point, the creative enterprise to exploit the cornet’s full expressive range, spanning across the registers, upper or lower; he emphasizes the group’s ‘very unique ensemble sound’ and he’s right. Wonderful music. 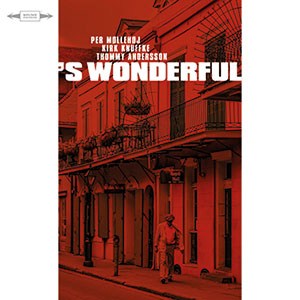