For Duke Ellington 1940 was a triumph against the odds, says Stuart Nicholson

In 1940, Ellington was in the recording studio 11 times, and the majority of material he committed to wax were some of the best performed, most adventurously crafted and emotionally serious work ever produced by a larger ensemble in jazz. Yet extraordinarily, he gave little intimation of what was about to come during the late-1930s. By 1939, with the Swing Era well under way, Ellington, who had been recording under his own name with his big band since 1926, was feeling the competition. The death of his mother in 1935 and his father two years later had sent him into a depression that saw his career slide into a holding pattern. Musical problems in his orchestra were beginning to mount – his two-bass configuration was rhythmically lumpy compared to, say, the svelte propulsion of the Count Basie orchestra; hit records had been few; his repertoire seemed dated and, from the public’s point of view, the band lacked a “hot” tenor man such as Count Basie’s Lester Young, Cab Calloway’s Chu Berry, Benny Goodman’s Vido Musso or Artie Shaw’s Georgie Auld.

Finally, at the end of 1939, Ellington reacted and put his personal problems behind him. His reception in Sweden (he would write ‘Serenade to Sweden’ in tribute) during a tour to Europe had lifted his spirits and would be responsible for a creative high that would propel him into the 1940s.

He broke ties with his management, the Mills Organisation, which had guided his career to date, left Columbia Records and signed to RCA Victor making three important additions to his personnel. Jimmy Blanton, one of the finest bassists in jazz, transformed the rhythm section, tenor saxophonist Ben Webster added solo excitement and a new tonal dimension to the sax section and composer and arranger Billy Strayhorn would challenge and inspire Ellington to greater triumphs.

The first intimation that Ellington and his orchestra were on the threshold of greatness came from their second session for RCA Victor in Chicago in March 1940. ‘Jack The Bear’ contains a rare moment of jazz history actually being made – Jimmy Blanton shattering the traditional concept of jazz bass playing with his virtuoso pizzicato technique. On it he shows how the bass could contribute exciting solo lines and interact with the ensemble without surrendering its basic timekeeping role. Then there was ‘Ko Ko’, which has been described as “one of the monumental events in jazz music”. It is an orchestral tour-de-force with the minimum of solo space (24 bars from ‘Tricky Sam’ Nanton and 12 bars from Ellington) that succeeds as a piece of absolute or ‘pure’ music in that its minor 12-bar blues form (repeated seven times) has no obvious ‘melody’ in the conventional sense. Its tonal ambiguity and use of dissonance, particularly in the fourth chorus, instantly separates Ellington from the conventional dance bands of the period. Here is a glimpse of the future more profound, even, than Charlie Parker’s ‘Ko Ko’ from 26 November 1945 (not the same tune). Here Ellington looks both ways, to freedom (bi-tonality and his amazing piano splashes of colour that anticipate Cecil Taylor) and form.

Within a week, Ellington was back in the studios and two more classics resulted. ‘Conga Brava’ has an elusive 20-bar form and contains Ben Webster’s first major solo statement with the band, climaxed by a brilliant brass quintet at the end. This headlong tour through exotic rhythms was followed by ‘Concerto For Cootie’, which like so much of his work from this period showed Ellington’s complete mastery of the three-minute form allowed by the then industry norm of 10-inch shellac discs. In an analysis of this piece in 1954, André Hodeir, in Jazz: Its Evolution and Essence, called this piece a work of genius.

But the simple fact is that Ellington did not just produce one work of “genius” during this period, indeed it would be most unusual if the same depth of intellect was incapable of sustaining such greatness if such a term is to meaningfully apply. While it is not possible to deal with every recording in this remarkable period, certain works do merit further attention, such as ‘Cotton Tail’, featuring Ben Webster, on Ellington’s brilliant arrangement built on the chords of George Gershwin’s ‘I Got Rhythm’. The arrangement is full of deft Ellington touches, such as the trumpet doubling the sax lead at the end of the first chorus, the ingenious counterpoint between brass and saxophones and the stunning saxophone soil, reputedly the work of Webster himself. Note too, how piano and guitar drop out at points in Webster’s solo, anticipating the “tenor trio” of sax, bass and drums masterfully exploited by Sonny Rollins and Joe Henderson in later years and today by Joshua Redman. Throughout 1940, Ellington was producing two, sometimes three genuine masterpieces every time he went into the studio such as ‘Bojangles (A Portrait of Bill Robinson)’, ‘Portrait of Bert Williams’, ‘Blue Goose’ that borrowed the first eight bars of harmony from ‘Stardust’ and has Johnny Hodges’ last soprano sax solo, ‘In A Mellow Tone’ (a reworking of ‘Rose Room’), ‘Across the Track Blues’, the superb Blanton feature ‘Sepia Panorama’, ‘Rumpus In Richmond’ and of course ‘Harlem Air Shaft’, the latter an inspired piece of writing notable for creating a remarkable climax in a short space of time during the final chorus.

What is remarkable about these pieces is Ellington’s organisational methods within the popular song form. Often there are several themes in one piece, different rhythmic figures emerge and recede and surprisingly, in view of the limited time span available, transitional and developmental passages. Ultimately, however, it is the sound of Ellington’s Famous Orchestra that sets him apart in contemporary music, what Billy Strayhorn called ‘The Ellington Effect’ – the use of highly individual, sometimes idiosyncratic soloists in combination to create great richness of tonal colour that was both unique and distinctive. Ultimately, however, these recordings are neither landmarks of jazz improvisation or big band dance music popular at the time. The conventional categories of jazz or even classical music seem inappropriate to embrace these major works, which are among the finest bodies of music created in the 20th century. 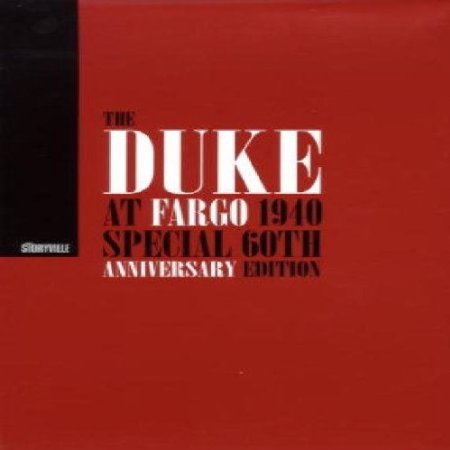 Duke Ellington and his Famous Orchestra

Danish label Storyville last issued their double-CD of this legendary ‘live’ Ellington dance date in 2000, labelled reasonably enough as the ‘60th anniversary edition’. Now they’ve released it again, sub-titled this time as Special 60th Anniversary Edition. Prior to Storyville’s involvement an earlier edition appeared in 1990 on the US-based Vintage Jazz Classics label. I mention this because that version boasted a 19-page booklet essay by Ellington scholar Andrew Homzy, a superlative track-by-track evaluation of the music which is not replicated on the Storyville release or matched by the Jerry Valburn-William Strother-Jack Towers’ notes repeated here from their 2000 release. Even so, there’s enough here to place the recording in context. Towers and the late Dick Burris, tyro audio engineers, had seen the band back in 1939 and resolved to record it when it came to Fargo, North Dakota, setting up their rudimentary gear having cleared their endeavour with the booking agency and Duke himself.

And what a feast of music they captured for this was the famed Blanton-Webster line-up caught in all their blazing glory on a one-night dance gig in the boondocks. No compromises offered bar the occasional pop song, the core repertoire – ‘KoKo’, ‘Sepia Panorama’, ‘Never No Lament’, ‘Cotton Tail’, ‘Boy Meets Horn’ (with every kind of cornet noise from Stewart) etc – all included. Forty-five pieces in all, some truncated for disc changeovers etc, the vocals less well caught than the ensembles. Trumpeter Nance, making his first gig with the band, sounds good, as do all the established stars. What comes across most for me is Blanton’s incredible buoyancy and the extraordinary rhythmic verve he and Greer demonstrate throughout, this exemplified on the outrageous version of ‘St Louis Blues’ that precedes ‘God Bless America’ as the gig’s closer. Then again there’s the sheer energy and audacity of the ensemble playing, every man on song and in the form of their lives. Oh yes, the sound is surprisingly good considering. Don’t wait another 13 years: snap this up now. (Peter Vacher)