In the dark anything is possible.

Or as T.S. Elliott put it: ‘So the darkness shall be the light, and the stillness the dancing.’ Welcome readers to the 2015 Cheltenham Jazz Festival where Phronesis (top) have plunged the Parabola Arts Centre into pitch blackness for the latest of their rare performances in total darkness, originally inspired by bassist Jasper Høiby’s sister losing her sight. Høiby wrote at the time: ‘Sister, now that your eyes have ceased to work, here’s something for your ears’, and proceeded to explore, with pianist Ivo Neame and drummer Anton Eger, how the loss of one of your senses could change how you experience music.

It led to Phronesis recording the Walking Dark album in 2012, and that disc’s final piece, ‘8 Hours’, opens this extraordinary concert. Neame’s liquid left hand and Høiby’s sinewy bass lock in unison, outlining the plot and building a momentum that Eger’s complex skittering thrust pushes into overdrive with ‘Urban Control’, pulling you to the edge of your seat even though you cannot see your hand in front of your face. The darkness heightens the senses and amplifies the intricate and ever changing detail in their highly propulsive and dynamic improvisation. It’s three minds operating as one, a deep, almost uncanny empathy that stands them apart from any other piano trio in Europe. This ‘Pitch Black’ show incorporates impressive new pieces, including ‘OK Chorale’, ‘Stillness’ and an expansive ‘Rabat’, as well as a colossal ‘Herne Hill’ from their recent Life To Everything album, and simply has to be heard. But not seen.

Archie Shepp (above) and his quartet may have been a last minute replacement for the cancelled Sun Ra Arkestra but the venerable New Thing sax pioneer and latter day expressive gospel/blues singer wasted little time in tearing into a fiery tenor sax improvisation on the opener ‘Hope 2’. Dedicated to the late hard bop pianist Elmo Hope, pouring out wave after wave of double-time choruses sliced through by Middle Eastern flavoured tones and slurs as though he just walked in from the sessions for 1972’s The Cry of My People. Accompanied by pianist Tom McClung, bassist Matyas Szandai and drummer Steve McGovern, the high point of a strong set, that also included Shepp’s warm gritty baritone singing on Ellington’s ‘I Don’t Get Around Much Anymore’, was his lengthy tour de force, ‘Revolution (Mama Rose)’, dedicated to his grandmother. Over McClung’s restless McCoy Tyner-esque piano, Shepp uncoiled a snaking soprano sax snarl, before beginning a lengthy incantation against the forces of slavery, oppression and social injustice, pleading passionately for change like a soul-soaked gospel preacher. A message that is as forceful and necessary today as it was when he first recorded it in 1982, and one of the clear highpoints of the festival. 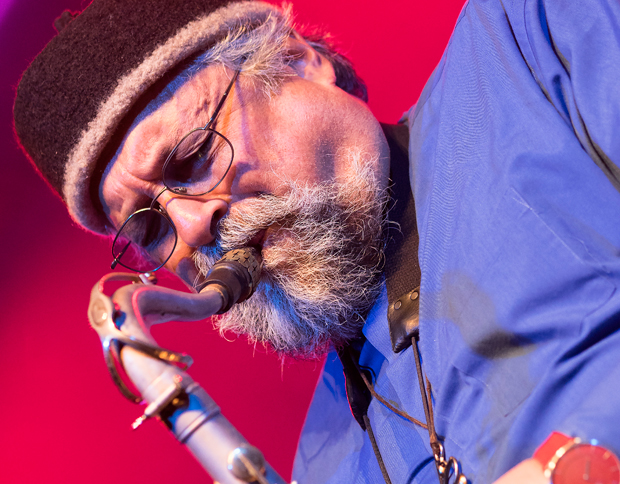 Fellow tenor titan Joe Lovano (above) deployed an alternative form of soul searching with his new Village Rhythms Band, as he explored the power of Afro-centric modal funk in uncompromising style. His burnished golden tenor tone seems to have deepened as his imperious yet richly soulful improvisations rippled out across the unctuous grooves of his band. Guitarist Liberty Ellman responded with taught lines rebounding between downtown New York and African high life, while drummer Otis Brown III and UK bassist Michael Olatuja laid down the deep-funk law. Yet it was Senegalese percussionist Abdou Mboup who made the most telling contribution as he stepped up with his talking drum to trade rhythmic blows with Lovano in the ultimate Afro-American dialogue. Things didn’t go quite so smoothly at Lee Konitz and Dave Douglas’ quintet meeting at the Town Hall, on an underehearsed and rambling set that was only saved by the sublime bass work of Linda Oh, who excelled with utterly sympathetic accompaniment or elegant solos that, along with Douglas’ strong playing, helped corral this gig into some kind of shape. Konitz was in extremely good humour and played with statesmanlike authority, yet frequently interrupted other solos with extended scat singing that only served to undermine any sense of momentum.

The French were out in force at the Parabola, taking its often-packed audiences by the scruff of the neck for some of the edgiest sounds of the weekend. New Anglo-French trio In Bed With… comprising of keyboardist Kit Downes, drummer/leader Sylvain Darrifourcq and guitarist Julien Desprez (above), made a virtue of whipping up dark, electro horror movie soundtracks and thrash-jazz riffage that tripped over itself a little too often to really hit home, while trombonist Samuel Blaser was almost upstaged by the slap-attack of mercurial guitar man Marc Ducret who served up each note three ways in a dazzling, if distracting, display. The Surnatural Orchestra (below) supersized these theatrical inclinations in a dramatic mix of sharply coordinated movement and music. 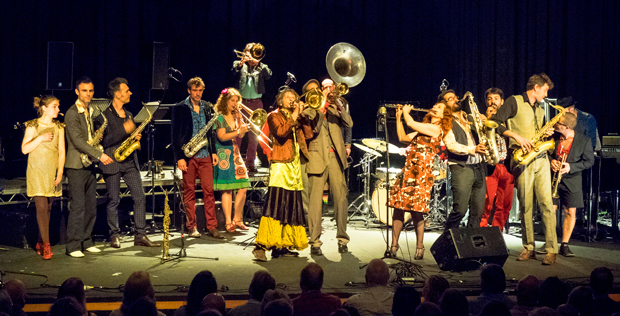 Yet it was longstanding Loose Tubes saxophonist/composer Julian Argüelles who closed out the Parabola’s top-notch weekend of music with an emphatic performance from his newly formed Septet – adding outstanding trumpeter Percy Pursglove, and rising stars George Crowley (sax/bass clarinet) and Kieron McLeod (trombone) – to his quartet of young guns, Kit Downes, bassist Sam Lasserson and drummer James Maddren. The star of the show proved to be Argüelles’ writing as he rearranged quartet pieces for the larger ensemble, matching driving rhythmic ideas with equally forceful harmony and melody – to devastating effect. With such an array of talent it was perhaps inevitable one member of the group would rise above the finely honed fray, and as such Pursglove simply soared through the air with a seemingly limitless supply of ideas, sonic invention and some impressive circular breathing to boot. A brilliant band and let’s hope we hear more from them soon.