Football may be occupying the minds of many at the moment (among more pressing European matters) and appropriately Phronesis’ explosive yet compellingly dynamic set at Cadogan Hall was indeed a game of two halves.

As a team – certainly greater than the sum of their three parts – the trio’s centre-midfield engine room is the tall, sharply cheek-boned Danish bassist Jasper Høiby – hair pulled back in a neat ponytail, allowing full focus on his many intricate, interlocking bass lines. Then there’s Ivo Neame (the band’s nippy winger), a pianist who combines whit and whimsy with dazzling but subtle technique, laced with enough guile to switch between poetry and power when needed. Yet the band’s undoubted star player is drummer Anton Eger, who provided the percussion equivalent of several overhead scissor kicks and was a blur of incendiary, Maradona-esque hand and foot-work throughout. 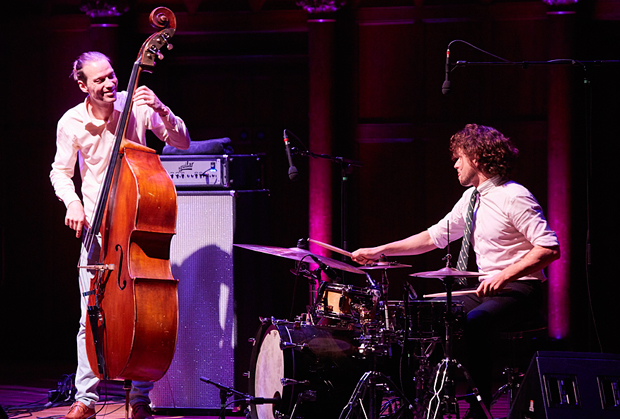 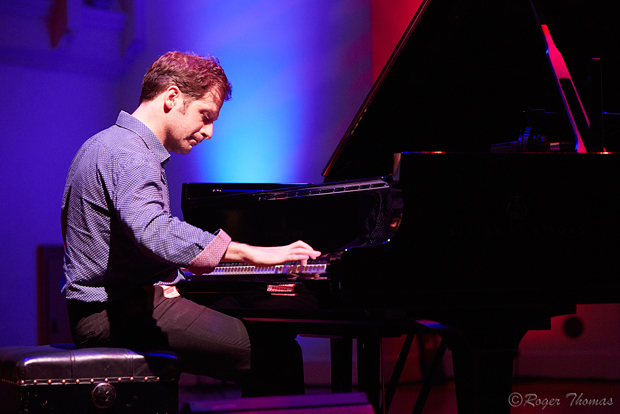 Whether it was some intermission oranges – or a much-needed beer – the band returned to the stage with a greater sense of relaxation, with shirtsleeves rolled up and even broader grins shared between them, the trio ripped into a thrillingly deep second set. Høiby’s descending upside down disco bassline for opener ‘Urban Control’ perfectly set up some blistering exchanges, Neame digging into the knotty chords to unearth some melodic treasures from the high-octane metronomic madness going on around him. The bassist took up the gauntlet with a nimble-fingered solo that plucked and pulled arpeggios across his fingerboard, before Eger threw in all manner of metric modulations, taking the beat in all directions. 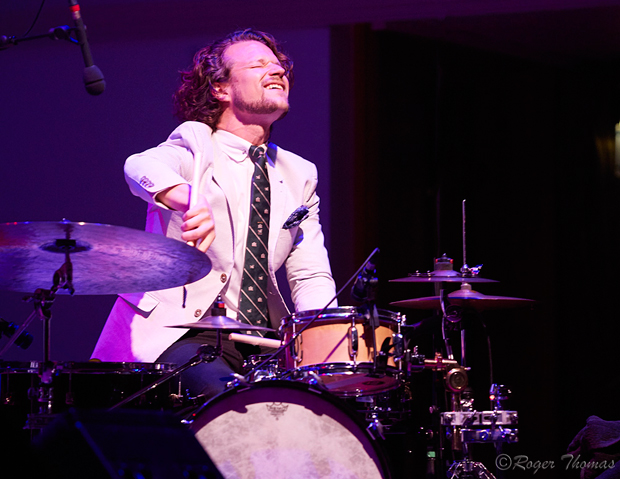 Kite For Seamus’ offered some relative calm from this rhythmic storm which soon blew up again with ‘Behind Bars’ and a deeply impressive ‘Rabat’ – the new album’s thrilling last tune. Bowing out to return for an encore Høiby’s offer of a request was greeted with an emphatic shout for ‘Abraham’s New Gift’ – their appropriately frenetic anthem from their album Alive – which Høiby began at a punishingly fast tempo. Spurring Neame to his most inventive display of the evening it was Eger, who head-banged his curly mopped head to a fittingly fearsome crescendo – smashing the odd time signature to pieces and pummeling every piece of his kit into submission. It seemed apt that he hurled a cymbal onto the front of the stage as a final splashing, crashing full stop to a night of adrenalised musical thrills.