Bassist Miroslav Vitous talks about the album that changed his life, Sunday at the Village Vanguard, by the Bill Evans Trio.

The one album for me goes back to when I was quite young. I was 14 or 15 when I heard it, very near the beginning of playing jazz. It would have been soon after it was released in America. I heard it through Willis Conover [disc jockey on the Voice of America Jazz Hour radio programme that was broadcast across Europe and other parts of the world from the mid-1950s] – thanks to him all of us in the East parts of Europe were introduced to jazz. Actually, we in a Communist country heard more of the music than Americans at the time! When I came to the Berklee school of music [on a scholarship in 1966], I asked my fellow students, ‘Do you know this album, do you know that album?’; and they didn’t. I realised that they came from various cities in the US where they used to buy records that they would find in the local shop, but wouldn’t have had access to everything that I had on the radio. We had the whole spectrum thanks to Willis Conover. It made a lot of players what they were and still are today.

The programme always used to be at midnight. I had a little Grundig tape recorder so I taped it. It was a little strange because the authorities used to jam the radio station so you would get kind of spooky noises – you could hear raaoow raaoow raaoow in the background, even when you’d found a little signal to hear the music.

‘Scott LaFaro was the biggest inspiration for me, the biggest icon in my life once I’d heard this – his talent was phenomenal’

But anyway: the album is Sunday at the Village Vanguard, Bill Evans. Two things grabbed me about it. Firstly, the bass playing, of course. Scott LaFaro was the biggest inspiration for me, the biggest icon in my life once I’d heard this – his talent was phenomenal. In the early days of jazz the bass took over from the tuba, of course. But at first people could not play the bass well – it took a while for the instrument to catch up.

But, just as important, it was the communication the group had – they had a conversation. And not the conversation you have in a normal jazz group, where you play the changes and have what I call a side-conversation via a distant point – these were the first ones who were actually holding a serious conversation. Not even Miles Davis at that time was doing that. They were really the first ones – thanks to LaFaro. He could be a voice next to Evans, and be an equal voice. Duke Ellington with Jimmy Blanton did that a little bit, but Blanton didn’t have the technique to execute it. After that, there was Miles Davis with the quintet with Tony Williams. It went in the same direction: change the changes, and if you get lost, let it happen, let it go. In Herbie Hancock’s biography, he said, ‘We couldn’t wait to get lost’! As soon as that happened, all this music could start to happen – once they were not locked in by the lines and the structure of the tune.

This leads to another thing to say about jazz – that it’s not as free as people think, because it has all those limits. Because you also have the roles: the bass role, the piano playing the harmony and so on, then the solo instruments go off on top of that. That was the model for jazz. But the Bill Evans Trio was having a direct conversation. Then Miles did that, and we continued it with Weather Report. The bass was not playing bass – the bass was like another equal instrument. That was the main reason why the sound was so new in Weather Report – the bass was playing like another saxophone or horn. So the other instruments had to answer: Zawinul had to answer me, I had to answer Shorter and so on. That’s possible because a bass has rhythm and harmony, so it can lead a band. All of a sudden we had this new music coming out – direct improvisation and direct communication. I don’t want to take all the credit for that, of course; but I do think the main reason for the sound being different was that the bass player did not play the bass role.

So for me it started with that trio, their attitude as much as the technique of LaFaro. Of course, when I first heard it, I tried to play like him – but I was such a bad copy, I played like Miroslav Vitous…! 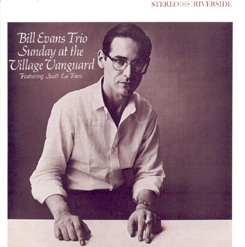 Sunday at the Village Vanguard

This article originally appeared in the August 2016 issue of Jazzwise. To find out more about subscribing, please visit: www.jazzwisemagazine.com/subscribe