Alphonse Mouzon: By All Means

If you want to wind up Billy Cobham (go on, I dare yah!), just mention disco drumming, and how it killed dynamics and individual voicing. So it’s bizarre to wrap your ears around why a rhythm master like Mouzon, who’d lent his skills to Weather Report and Gil Evans, would tie himself to the ‘limitations’ of disco. You may wish to reply to the lycra melody of ‘Do I have to?’ with the reply ‘No! Please don’t!’ But what really defines By All Means is cut two, ‘Space Invaders’. This a clattering ‘duet’ between Mouzon’s pyrotechnic drums and, yes, the special effect ‘sound track’ of the classic arcade video game Space Invaders. This is the Zeitgeist of 1981 in four minutes and seven seconds. Disco plus Space Invaders makes By All Means a perfect time capsule of the jazz musician desperate to exploit (and himself be exploited) by the fashions of the era. There’s a funk edge to ‘The Jogger’ which nearly redeems the album by itself, given the class Herbie’s piano brings, while the closing title track also features Hubbard in glitter ball and ‘Thanks for the session rate’ mode. Eminently entertaining, eminently danceable, eminently an attempt to plug into a commercial hit by all means possible. And why not? 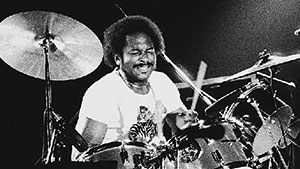