The four named albums (Hard Bop, Drum Suite, Impulse!!! and Caravan), emanate from a period when Blakey and company were seldom out of the studios, coursing through these Columbia, Impulse! and Riverside sessions while fitting in extended road assignments. What a time this was. Still, none of these albums quite measure up to the best of Blakey. If ‘Cranky Spanky’ from Hard Bop sounds forced, Hardman straining to make an impact, with McLean urgent, it is the unsung Dockery who scores on ‘Stella by Starlight’ and throughout, McLean soaring on the overly-animated ‘My Heart Stood Still’ where Hardman seems to be trying too hard. Avid has chosen to run the band tracks from Drum Suite to follow on the Hard Bop tracks (same personnel) for the sake of continuity with the Percussion Ensemble given a clearer run.

Thus ’Stanley's Stiff Chickens’ (?) follows and is fine, markedly more relaxed, and better for it. If Dockery's is the name to stress – he rates no mention in the Grove jazz dictionary – then McLean (still only 25) is forceful and inspired. The percussion tracks, three in number, are fun to hear, and it's good to recall pianist Ray Bryant on his ‘Cubano Chant’ and cellist Pettiford on ‘Oscalypso’. The Impulse! album on CD2 from 1961 assembles a Messengers top team – Morgan, Fuller, Shorter and Timmons – with Fuller's ‘Alamode’ kicking from the off, Shorter effusive and Morgan full-on, Blakey driving as only he could. Marvellous music.

Further tracks concentrate on standards with less impactive results. Caravan substitutes Hubbard for Morgan and again mixes originals and standards. Bassist Reggie Workman is missing from Avid's personnel listing and Riverside's sound lacks guts but the music, via Shorter and Hubbard's originals is fine with the trumpeter quite perfect on ‘Skylark’.

So, a mixed bag – but just good enough for four stars. 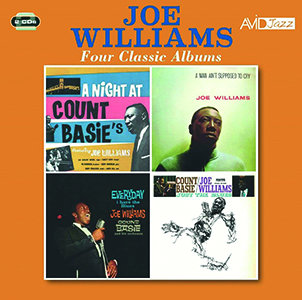