When American saxophonist Bob Mintzer was appointed chief conductor of the WDR Big Band Cologne in 2016, his big-band credentials stretched back 50 years – by the early 1970s he was scoring for Buddy Rich. But he was equally known for the barnstorming technical flair and rhythmic drive that he brought to the Yellowjackets when he joined them in 1990.

Last year, small group and Cologne big band came together with the release of Yellowjackets XL, an orchestral expansion of the ‘Jackets aesthetic. This album also maintains a fusion strand, but now the emphasis is on Mintzer's rich voicings and tight stabs, tricky counterpoint and showcases for brass. Mintzer's solos stand out – check out his choruses on the big band re-make of the Yellowjackets’ ‘One Music’ – but the Cologne big band have strength in depth and the rhythm section is solid.

The 10-track original set opens with saxes and brass intertwined on the silky glide of “A Reprieve,” continues with the declamatory funk of ‘The Conversation’ and then delivers the twisty lines of ‘Stay Up’ – here groove alternates with fast swing. Latin jazz is referenced on ‘Montuno’ and ‘Canyon Winds’, ‘Herky Jerky’ is based on rhythm changes and the album's ballad “New Look” is scored with a light touch.

Mintzer's arrangements range from full-blast brass to the subtle shades of woodwinds and flutes, and it is the latter which dominate ‘Whack’, the album's most interesting track, delivering asymmetric lines and soft atonal shades while a slinky groove unfolds underneath. 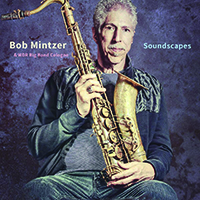