It's fitting that Pete Judge guests on the opening ‘Dodola’ because EYOT share some of Get The Blessing's forward-charging energy and that group's magpie-like musical ethos: if it's bright and shiny, whether the roots are in classical, pop or contemporary jazz, then EYOT will harness any musical tag to their will.

So Dodola' starts from a humble groove and builds to an anthemic splendour, largely driven by Iljic's piano. Iljic is the creative core of the band: his piano work is classically, romantically based, at times echoing EST as on ‘Linen’ which also employs themes by the Serbian composer Mokranjac. The band pull deep on their Serbian roots (the album title apparently refers to the time signatures central to Balkan folk music: 5/8, 7/8, 9/8), while also whipping up cinema-sized songs like ‘Rain’ where the piano again sings out. Others may even hear elements of Yes-like prog (Stojilkovic's bass on ‘Rite’ brings to mind Chris Squire).

Whether all these ingredients cook down into a convincing coherence is for punters to decide, but there's no doubting Iljic's piano skills and lyrical composing. 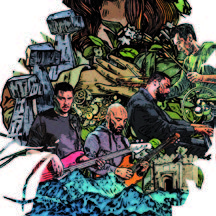