The 36 vibrantly performed tracks that make up this career-spanning compilation of guitarist Gary Lucas' numerous recordings is the follow up to his previous Level The Playing Field and Operators Are Standing By collections. For The Essential… Lucas has plucked selections from those releases and added a generous helping of extra tracks that show the full scope of his guitar playing dexterity, together with his talent for searching out the perfect voice to accompany a chosen song. Disc One of the set focuses on his Gods And Monsters project with strong performances from former New York Dolls vocalist David Johansen, Jeff Buckley and Canadian singer Mary Margaret O'Hara among others. The killer cut here, however, is ‘King Strong’, an adrenalised instrumental that sonically zooms in and out of focus with the occasional meaty reference to the music of Zappa spliced in among the improvised hurly burly. Disc Two offers a wide selection of solo pieces, rare tracks and collaborative pieces with the various musical artists that Lucas has worked with over the years. These include Suicide vocalist Alan Vega, Sonya Cohen, Feifei Yang and Nona Hendryx who teams up with Lucas for a spirited rendition of Captain Beefheart's ‘Her Eyes Are A Blue Million Miles’. As he was famously once Beefheart's guitarist and manager, the song holds an extra potency, with Lucas delicately embroidering Hendryx's soulful vocal before respectfully laying down a tender solo to the memory of his late mentor. Also included are examples of Lucas' music for film, various instrumentals and his rendition on acoustic guitar of an excerpt from Dvorak's New World symphony. As its title insists, this really is an essential overview into the work and diverse musical passions of this remarkable musician. 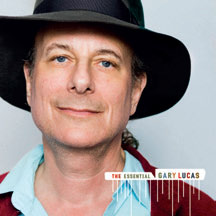