I’ve written before in praise of Bloom's soprano work – for instance, when reviewing the album Some Kind Of Tomorrow (Jazzwise 261) which saw her in duo with bassist Mark Helias. It's probably no coincidence that the present duo was expertly mixed by Helias, after being recorded remotely by Bloom and Miller in a series of five Tuesday internet encounters last spring. The drummer is some 20 years younger than Bloom, and has worked with people as different as Marty Ehrlich, Dr Lonnie Smith and Ani DiFranco.

The fact that she plays an allegedly non-melodic instrument does nothing to prevent her from contributing varied textures and grooves; indeed, one of the joys of the album is that, despite the joint improvisations being totally free and unrehearsed, Miller's pulse is consistently engaging and inspiring. This, of course, leaves Bloom to carry the responsibility of constantly finding melodic hooks that are pleasing and, despite the occasional avant-garde flourish such as ‘The Wild Frontier’, she stands out as usual for her lyrical ideas and emotive tone. Even if the prospect of 11 tracks of soprano-and-drums doesn’t initially appeal, this is well worth hearing. 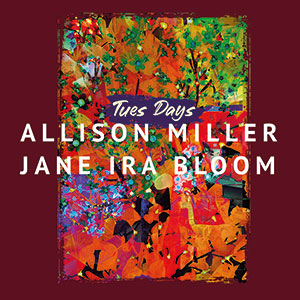