This is Joe Lovano's second album as a leader for ECM after leaving Blue Note records in 2014, having recorded some 26 albums for the label as either leader or co-leader. Both Blue Note and ECM have their own unique history and tradition, which Lovano navigates effortlessly; and in so doing, reveals musicianship of depth and enormous creativity. Lovano conceptualised Trio Tapestry from his experiences in the Paul Motian Trio, where the absence of a bass saw him move between accompanist and soloist. He also expands on a period of deep study of serialism following his work on Rush Hour in 1995 with Gunther Schuller. These may sound challenging parameters within which to work, yet Lovano's saxophone tone, working in a range from pianissimo to moderato, is sufficiently light to produce beautiful, detailed filigree improvisations that seem to float in the air, is not one to reveal the mechanics of music. The album is well-programmed with 'Chapel Song', ‘Night Creatures’ and ‘West of the Moon’ easing the listener into the trio's unique sound world, where each musician seems perfectly attuned to each other's wavelength and with such high levels of musicianship involved, this album emerges as a minor classic. 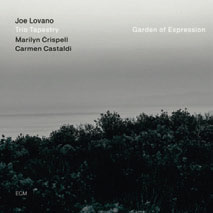