Recorded in the large assembly hall of percussionist Eddie Prévost’s old senior school in Deptford (where they were also screening Stewart Morgan’s film Eddie Prévost’s Blood),Sounds Of Assembly documents the second live performance of this intriguing quartet. Distinctly low key in mood with the players gently guiding their instruments along, the flurries of bowed cymbals, plucked strings and snippets of parping sax they produce are more atmospheric than explosive. Throughout it feels as though Prévost is the central force here, his percussive presence seems to conduct the session and drive his fellow musicians into passages of light and shadow. It is only at the end that the reins are loosened and a more boisterous approach is permitted to enter. For one brief moment John Butcher’s saxophone is suddenly set free and, as a result, the others joyously follow his example. There is a sense of discipline and learning that permeates this album, and it is the professionalism of all those involved that make it finally click into place.

Equally sombre, yet somewhat livelier, are Butcher’s two encounters with veteran US double bass player Barre Philips and Norwegian drummer Ståle Liavik Solberg that took place in 2018 and 2019 in Norway and Germany. Unlike the minimalist soundtrack vibe of the Prévost recording, here there is more meat on the bone – with sturdy interplay between the players that packs a punch. Phillips is particularly on form here, the sound of his bass on the opening track alternating from improvised rippling to fully loaded concert hall boom – exquisitely overlaid with Butcher’s trilling bird-like sax intonations and Solberg’s firmly placed percussion interludes. Elsewhere on ‘Travelling’ Phillips opens the track with an elegiac solo that summons up a trip back in time to some late-1960s loft rehearsal – a seemingly effortless flexing of musical muscle where the full artistry of his playing technique is unassumingly displayed. 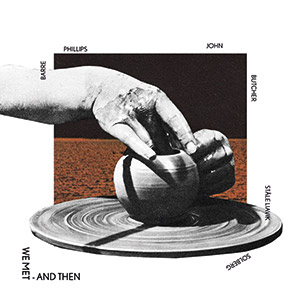 We Met – And Then