The band leader Jorge Rossy made a name for himself as a drummer with Brad Mehldau’s original trio after having settled in New York in the early 1990s. He parted ways with the stellar pianist to focus on his own piano playing over a decade later and had moved back to his native Spain. His debut, Puerta (for ECM) puts an additional spotlight on Rossy’s high-end musicality and gifted multi-instrumentalism. He plays on both vibraphone and marimba with the kind of finesse, percussive lyricism and group sensitivity as he has demonstrated in his work behind the kit.

Funnily enough it’s Jeff Ballard, his replacement in Mehldau’s illustrious trio, who’s on drum duties here. The originals are all by Rossy with the exception of ‘Cargols’ written by saxophonist Chris Cheek, a close acquaintance from their work together in alt rock-meets-jazz forerunners Bloomdaddies. Here though Rossy is unusually understated, playing with wonderfully nuanced dynamics and an ambient yet percussive approach that distances itself from the vibes’ more familiar sparkly lyrical nature. But what makes it work is the intimate three-way dialogue and the enigmatic sonicworld it creates. The trio are spot on whether playing in a more latin or swing vein but also faintly reminiscent at times of the Modern Jazz Quartet’s more chamber classical-orientated moments, such as John Lewis’ superb film score to Odds Against Tomorrow. Puerta has an after-hours feel perfect for late night listening, but there’s a real depth to it as well. 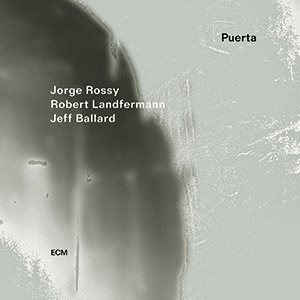