Conceived as a suite to run continuously, this 57-minute composition falls into eleven sections, each of them to some extent following the maritime history of the Clyde since the 17th century. This was when the Merchants’ House campaigned for the river to be deepened for shipping, eventually making Glasgow ‘The Second City of the Empire’. Not shying away from links to the slave trade, (indeed Paul Towndrow believes music can effectively ‘cut to the quick’ of historical truth better than words), his piece creatively explores musical connections with the Mississippi and the Ganges as well as the Clyde itself. The opening sections pack in plenty of drama and some fine ensemble playing, plus notable solos from trumpeter Tom Walsh and tenor saxophonist Helena Kay, not to mention the pipes of Ross Ainslie, which bring a Scottish tinge to the music. But then over a long ostinato there's space for a rhythmic dialogue between Sodhi and Cosker and the musical palette broadens. From South Asia we are drawn back to Scotland for ‘Bunce Island’, a movement beginning with Ainslie's traditional reel-inflected pipe, before a fluent jazz vibes solo from Herak. There's a similar cross-cultural mix in ‘Second Line For Rick’ where fiddles play an unmistakably north-of-the-border theme over New Orleans parade drumming in ‘Second Line for Rick’, before ushering in the powerful trombone of its dedicatee, Rick Taylor, who sadly passed away not long after this recording was made, As well as composing the piece, and making some brief cameo appearances, three-quarters of the way through Towndrow reminds us what a compelling alto soloist he can be, on ‘The Tontine Heads’, From there, the piece flows on, like the ever-broadening river itself, to a thoroughly satisfying final movement dominated by the highland pipes of Ainslie, It is a piece to be listened through in order many times to catch all its nuances and its overall power, and it is a fine achievement for Paul Towndrow and the excellent band he drew together to bring it to life. 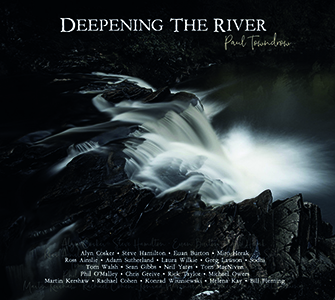