This post-bop, pre-lockdown recording is comforting and vivid, capturing three players in a resonant room loving their work. Combining three generations, with Sussex hip priest and Tubby/Wellins drummer Spike Wells the energetic elder, a chordless trio such as Sonny Rollins' is the mode for excavating mostly standards. The point can always be questioned, when you can pile high Blue Note dates exhaustively defining the sound. But Ubuntu is a UK label supporting players who, as Myer defines the elixir, “get the feeling you really mean it, that what you're playing has to be played at that moment, it's just this.” That's what you're hearing as Riley Stone-Lonergan's full, round tenor tone slides easily onto ‘A Slow Boat to China’. There's a crash when Wells' thrusters come on, as Bird's ‘Cheryl’ rolls racehorse-sleek down the track, and Dewey Redman's ‘QOW’ boasts a Myer dance pulse the Stone Roses would have nicked in Madchester days. The flicker and rustle of Wells again revving up before Stone-Lonergan blows straight and clear on Joe Henderson's ‘Serenity’ recalls the author's own chordless resurgence on The State of the Tenor (1986). Myer is gently guitar-like before Stone-Lonergan softly rings blues and rueful romance from ‘God Bless the Child’, while the saxophonist's lugubrious pre-bop feel on self-penned tribute ‘Pound for Prez’ honours a mutual hero. “I've sat in the bar between sets listening to Riley and Spike enthusing about Lester,” Myer says, “reaching back beyond all our experiences.” Indeed, this sort of music was played almost nightly in Myer's Brighton hometown before the shutters fell, headily transfused with audience energy. Maybe you've heard it all before. But when they feel it, we still do too. 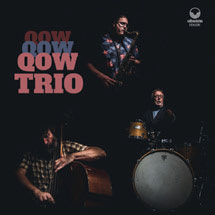