Solstice lay before you such a tasting menu of musical treats, it's hard to know where to begin: Jez Franks' vividly chorded ‘PTSD’ which starts elegiacally with beauteous doubled lines for Freestone and Beraha, then builds to stratospherically crazed swells, replete with Beraha's top Cs? Or how about Freestone's Brazilian-tanged ‘Hermetica’ with Manington time travelling its complexities with easeful grace? Or indeed Turville's fishy tale of ‘Three Omegas’, as the amigos in the band relish the orchestral layering set against the open spaces for Beraha and the keys man to soar relaxedly free.

And that's just for starters. With each band member a leader and composer in their own right, it's boggling how each player gets to own their own authority without laying the dead hand of dictatorship (compassionate or otherwise!) upon the others. Although this is a band that relishes complexity (check out the hall of mirrors patterning of Freestone's broccoli-inspired ‘Familiar Fractals’) it's never complicated for its own sake. Instead, Food for Thought invites you to taste and try, then definitely to buy. 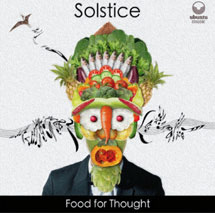